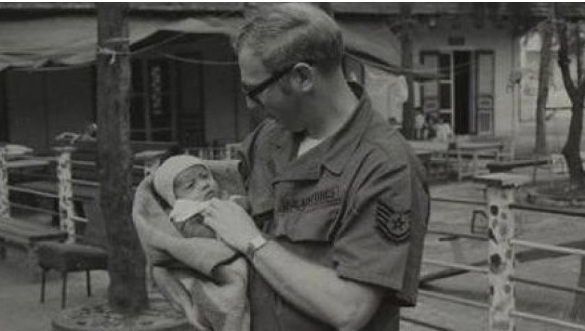 Kimberly Mitchell’s story starts in Vietnam. So does the history of the organization she will soon lead, Veterans Village of San Diego.

This summer, the two narratives are set to dovetail in a way that would’ve been hard to predict.

Veterans Village was created in 1981 as a recovery group for Vietnam War veterans who returned from combat and realized they needed help. It is the most venerable private veterans rehabilitation organization in San Diego County.

But Veterans Village, which started out as Vietnam Veterans of San Diego, is facing generational change. Its longtime leader is retiring.

Phil Landis, a no-nonsense former Army officer who fought in Vietnam, has been CEO since 2007. Before that, he had served as chairman or vice chairman of the group’s board since 1997.

His replacement will be Mitchell, a 45-year-old former Navy officer whose life story is more dramatic than most Hollywood blockbusters.

She was orphaned as a baby during the chaos of the Vietnam War, saved only by a string of miracles.

It was 1972 outside Da Nang, South Vietnam. An old man found a tiny baby on the side of a road, still clutched in the arms of her dead mother, still trying to nurse.

Unable to go on himself, the man handed the baby over to a young South Vietnamese soldier whom he met while evacuating the town of Quang Tri as the Viet Cong advanced.

The baby fit inside a villager’s pointed straw hat.

The soldier, a 22-year-old second lieutenant, knew he had to do something. He trekked nearly 40 miles, on foot and bus, to deliver the baby to the nuns at Sacred Heart orphanage in Da Nang.

That’s where Air Force Tech Sgt. James Mitchell found her. An American airman, Mitchell was a chaplain’s assistant who frequently brought clothes and supplies to the orphanage.

Tech Sgt. James Mitchell and the baby who would later be renamed Kimberly Mitchell(Family photo courtesy of Kim Mitchell)

Kim Mitchell is not sure what exactly captured her future father’s heart that day.

Photos show her as a dark-eyed bundle of blankets next to the big, blond Mitchell.

He adopted her and returned home to his wife, Lucy, in the United States. They named the girl Kimberly.

The family eventually settled in small-town Wisconsin after James Mitchell retired from the Air Force. They adopted another child, a son.

Kim Mitchell was drawn to the military, like her dad. She was accepted at the U.S. Naval Academy and graduated in 1996. It seemed a good fit.

A life of service

“Even in kindergarten, I wanted things perfect. I wanted square corners on my bed. I wanted my clothes folded,” Mitchell said, describing the attraction to military order. “I did not know that people didn’t iron their blue jeans until I was an ensign on my first ship.”

What followed was a career at sea — a destroyer, an amphib and a frigate — in addition to shore assignments in Bahrain and at the Pentagon. She picked up a master’s degree at George Washington University.

In 2012, Mitchell was working for the chairman of the Joint Chiefs of Staff, in the Office of Warrior and Family Support.

Her life took another sharp turn.

Instead of returning to sea as second-in-command of an Arleigh Burke-class destroyer, Mitchell decided to resign her commission after 17 years — a few years shy of a Navy pension.

Her boss in the Office of Warrior and Family Support convinced her to become co-founder and president of the Dixon Center for Military and Veterans Services. The nonprofit group in Washington, D.C., was formed to help service members with the transition to civilian life.

“I started weighing what was most important to me and where I could do the most good,” Mitchell said about the choice. “I have no regrets, and I think that’s the sign of a good decision.”

Her partner at the Dixon Center, a retired Army colonel, said he chose Mitchell to join him because she has a can-do ethic.

“She looks at things from a systems approach. Especially working in the Pentagon, where things can bog down from bureaucracy, there were ways to accomplish the objectives by changing the conversation,” said Dave Sutherland, who is co-founder and chairman of the Dixon Center.

She “focuses on outcomes, as opposed to what can’t be done,” he added.

Mitchell did that for five years before getting the call from Veterans Village, an organization she knew through connections. Landis, the outgoing CEO, has served on the Dixon Center’s advisory board.

So, the former Navy officer is heading west with her yellow Labrador named Trouble. She has never worked in this Navy town before.

Mitchell is scheduled to take over at Veterans Village in July, after the group’s annual Stand Down for homeless veterans weekend.

The organization has a $10 million annual budget, according to its financial filings. About 40 percent of its spending goes to recovery programs, while a fifth is dedicated to providing transitional housing.

Leaders acknowledge this marks a new chapter for the 36-year-old nonprofit located on Pacific Highway.

The board is dominated by older, retired military men. The clientele is largely male.

William Kowba, chairman of the Veterans Village board, said his organization sees itself at a crossroads as Mitchell enters.

“We recognize that the face of the veteran is changing dramatically. Vietnam veterans were overwhelmingly men. Now, we have combat veteran women of the most recent conflicts who are in need, and we made those adjustments,” he said. “It was appropriate that the Vietnam veteran, Phil, be relieved by a Gulf/Afghan-conflict era veteran. The fact that Kim is a woman is also a recognition that it’s no longer a boy’s club.”

Mitchell said she feels a strong duty to the Vietnam War generation of veterans — in addition to understanding firsthand what it means to serve in the post-9/11 period.

“Especially the Vietnam veterans — you know why it’s personal to me to ensure that every resource, that anything we can possibly provide to them, is provided,” she said this week.

“I’ve had several Vietnam veterans come up to me and say, ‘You’ve got to make a promise to us that you’ll keep doing what you’re doing to ensure that future generations have the resources, so they don’t end up where we are,” Mitchell said. “And I made a promise.”

Mitchell is used to unexpected turns in her life. And her unique story took another interesting twist in 2011, when she revisited Vietnam for the first time.

Rest of the story

As a surprise for her 40th birthday, Mitchell’s friends organized a meeting for her with the nuns in Da Nang.

Mitchell thought her group was headed to a street market, but instead they found the orphanage’s new building.

The sisters there looked up Mitchell’s birth name, Tran Thi Ngoc Bich. Her records were in the ledger: Baby 899.

But there was still no new information about her family, or how she became orphaned.

Mitchell’s story made the Vietnamese press as a homecoming narrative.

But there was more to come.

In New Mexico, a former South Vietnamese soldier read about Mitchell’s visit to Da Nang in a magazine printed in his native language.

He was that 22-year-old soldier who delivered an abandoned baby to the nuns in 1972.

His name: Bao Tran. The orphanage had used his last name, Tran, for the baby in its records.

They had asked the soldier to give her a first name before he left. He chose Ngoc Bich, or Precious Pearl. But he never knew what happened to her, or if, like him, she eventually immigrated to the United States after the war.Based on the magazine story, Bao Tran searched out Mitchell.

At first she didn’t believe him, thinking it was a scam. She had never known about his role in her story. But the dates and details synched up.

He greeted her with a doll tuck into a pointed straw hat — just like the one he had found her in.